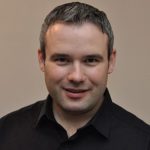 Russell gained his BMus and MMus at the prestigious Guildhall School of Music and Drama in voice on an unconditional place under the tutelage of Mr Ian Kennedy. After leaving college Russell has made his mark as a popular classical tenor performing throughout the UK and Europe. 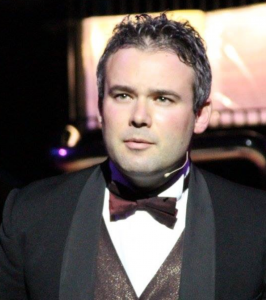 Russell has a very keen interest in the works of Gilbert and Sullivan, going so far as to write his Masters thesis on their life and music. He has performed many of the principal tenor roles across the Savoy opera range including The Defendant, Marco, Frederic, Hilarion, Ralph, Captain Fitzbattleaxe, Richard Dauntless, Earl Tolloller, Duke, Alexis, Nanki-Poo and Box, only three left! Recently Russell has been accepted to sing principal tenor in the world renowned “Grims Dyke Opera Company”. His recital work is also recognized in other fields of English music, most recently song settings of the poetry of Housman in “The Blue Remembered Hills” for the Worcester festival.

Not only happy in operatic roles, Russell is also a keen concert recitalist and after dinner entertainer, having performed seven times with his Young Proms colleagues in the West Midlands area, and having raised over £100,000 for numerous local and national charities. Further afield Russell also works for the London agency Hartley Voices with its group AKA Opera providing unaccompanied opera classics for after dinner and wedding entertainment.

Russell is also very proud to have a strong group of private students for both vocal and music theory tuition, with many students reaching Grade 8 and even beyond to Diploma level.

When wanting warmer climes, Russell spends most summers performing in the south of France, ranging from full scale operas, to concerts in converted barns.

Russell is also a fellow of the London College of Music (FLCM).

Dear Sara, I just wanted to say an enormous thank you. You and the rest of the choir were incredible. So many of the guests made the same comments to me at the wake. I just wish I’d asked you to sing some more!! The final one was just perfect. And thank you again. Elly x

“I just wanted to say thank you so much for such a lovely performance at the funeral on Saturday. Everyone commented on how wonderful you were. It made such a difference to the day to have a live performance of Mum’s favourite pieces of music and made the day even more memorable as a celebration of mum’s life. I’m just so sorry that Dad and I couldn’t have met you on the day. Everything went so fast! From the whole family, our grateful thanks, Mark”
– Funeral service, Mortlake Crematorium, Richmond, London, 2019

Thank you both for a wonderful performance. It was inspirational, and my mother in particular was uplifted. You made it very special. My kindest regards, Andy
– Funeral Service, St Pauls Church, Woodford Bridge, London 2012